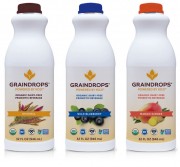 Graindrops the first non-dairy based koji-processed probiotic and can now be purchased off the shelf in over 175 Whole Foods Market stores nationwide.

“Our quest was to merge this wisdom of the ancient Eastern tradition with Western science and advances in technology.”   Susanne & Torodd Lien, co-founders of Graindrops discussing the Koji process.

Probiotics are being touted in an increasing number of studies that show healthy digestive systems benefit sports training, depression treatment, lowers blood pressure, reduces inflammation and supports health therapy. Guided by the help of the best Japanese and Chinese koji masters, microbiologists and food scientists Graindrops has been developed over 14 years in both Europe and the United States.

“In his weekly Wednesday at Whole Foods series, Max Goldberg says: “It didn’t take long for me to be blown away by a new drink called Graindrops… I couldn’t stop drinking it.”

About Graindrops:  Based in Northern California, Graindrops is dedicated to promoting optimal health through wholesome nutrition. Using batch crafted koji, Graindrops probiotic beverage is made from the purest ingredients to promote digestive health and deliver extraordinary nutritional value.  Find us on Facebook!

Get notified about new releases.